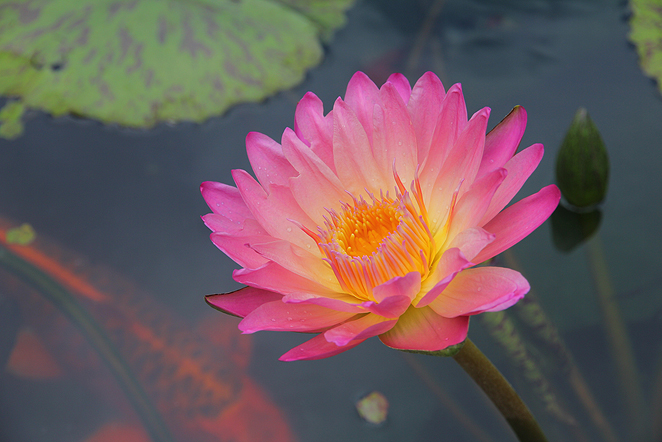 From: £22.00
Photographic Print. Pink Water Lily and Koi fish in misty grey water, Lily pond in Holetown, Barbados, Caribbean.
The ancient Egyptians worshipped the Nile Water Lilies, which were known as Lotuses. The Lotus motif is a frequent feature of temple column architecture. The white Egyptian Water Lily, a flowering plant of the family Nymphaeaceae is not the same as the Lotus flower Nelumbo which has a distinctive seed pod in the centre, however it is called Nymphaea Lotus. It opens at night and closes in the morning whereas the Egyptian blue Water Lily, N. Caerulea opens in the morning and sinks beneath the water at dusk. Egyptians found this symbolic of the separation of deities and of death from the afterlife. Depictions can be traced back to the tombs of ancient Egypt and the blue Caerulea was used to symbolise Upper Egypt with the Papyrus flower as the symbol of Lower Egypt, to depict a united country. Remains of both flowers have been found in the burial tomb of Ramesses II.
Colours are as accurate as possible but may differ slightly due to screen calibrations.Shipping outside UK mainland is estimated, on occasion a variation will be emailed before dispatch.Images printed at a Fuji approved professional laboratory on highest quality archive papers, Fuji Crystal or DP 2.
A Signed Certificate of Authenticity Card states the series number.