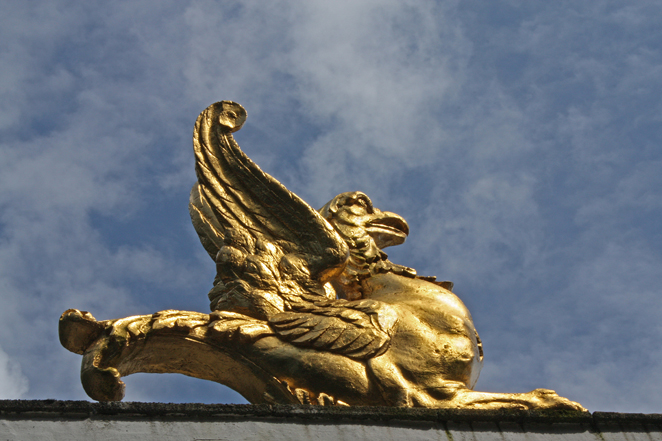 Click the phoenix for a link to the official website of Portmeirion. You can view my photographs in the Portmeirion section here on my website and the Signed Limited Edition Print of men playing chess in Paintings in Gouache. My photograph of the Tai statue was used on the cover of their brochure for 2 years and other photographs for marketing purposes.

When it rains or the weather is changeable, I wait for the sun to shine to photograph the village, architecture and gardens because I think it is like a beautiful stage set waiting for the spotlights it deserves to be switched on, so that it glitters.

Portmeirion is a village and area of woodlands on an estuary which is set into the hills and mountains of Snowdonia. It was designed and built by Sir Clough Williams-Ellis who wanted to show that 'a very beautiful natural site could be developed without spoiling it'. He fought for beauty, 'that strange necessity'. From 1926 - 1976 he created a mixture of buildings, architectural features, fountains, curiosities and statues which he collected from around the world.

At Portmeirion, while filming a one off episode of the spy series, Dangerman, the idea for The Prisoner was sparked off for the writer and main character of it, Patrick McGoohan and filming took place in 1968. Due to the clever design of the village, every step taken is a different view, creating many perspectives, which has a magnifying effect and this effect is further enhanced by film in The Prisoner.