Fish and Water Lily in Reflections of Neptune 3. Barbados 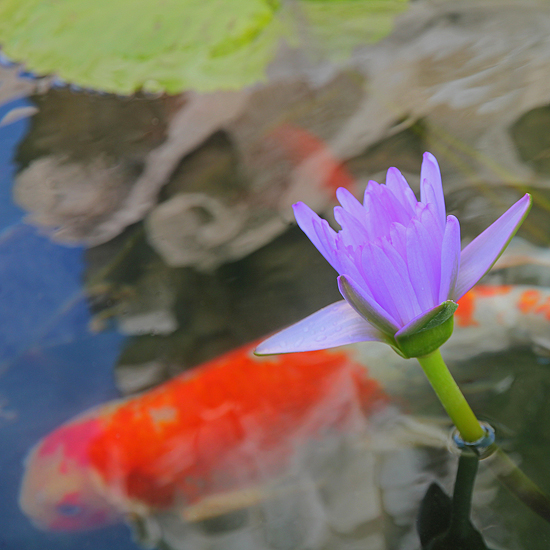 From: £22.00
Photographic Print. Orange Koi fish in milky reflections of a Water Lily pond at a Holetown restaurant, Barbados.
Although the fish are swimming, the photograph has a tranquility and stillness due to the splendour of colour and the hazy water in the water garden in the Caribbean. The word Koi was first used about 2,500 years ago in China. Koi are believed to have been introduced to Japan with the invading Chinese and according to Koi fish history the first account of them being kept by an emperor in Japan was in AD 200. Colour mutations occurred naturally and breeding for patches of colour began in China around 1000 years ago. Carp fish were first bred for colour mutations in Japan around 1820, where selective breeding of the Prussian Carp led to the development of the goldfish.
Colours are as accurate as possible but may differ slightly due to screen calibrations.Shipping outside UK mainland is estimated, on occasion a variation will be emailed before dispatch.Images printed at a Fuji approved professional laboratory on highest quality archive papers, Fuji Crystal or DP 2.
A Signed Certificate of Authenticity Card states the series number.