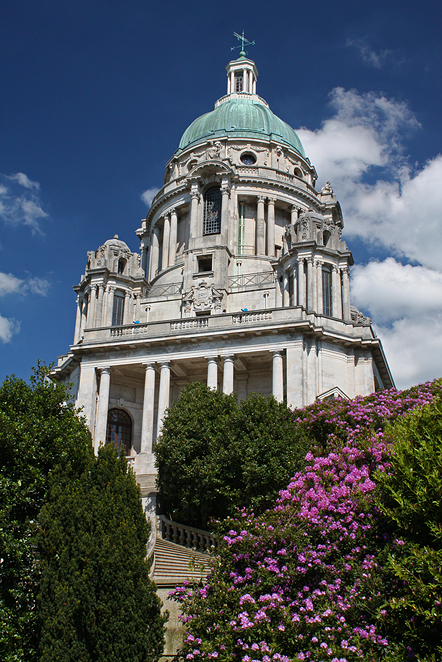 From: £22.00
Photographic Print. Ashton Memorial folly with Rhododendrons in Williamson Park, Lancaster, England.
The Ashton Memorial is a folly built between 1907 and 1909 by millionaire industrialist Sir Lord Ashton in memory of his second wife at a cost of over £80,000, equivalent to around £7 million in 2015. Around the copper dome are sculptures by Herbert Hampton representing commerce, industry, science and art. This photograph is special to me because it still has the Rhododendrons which were sadly ripped out by the landscapers. They provided a lush blanket of glorious colour edging down each side of the sweeping fairytale staircase, a magical backdrop for the steps and fountain and a base from which the monument rose. The Ponticum spreads but it could have been prooned and contained, as it had been for many decades.
Colours are as accurate as possible but may differ slightly due to screen calibrations.
Shipping outside UK mainland is estimated, on occasion a variation will be emailed before dispatch.
Images printed at a Fuji approved professional laboratory on highest quality archive papers, Fuji Crystal or DP 2.
A Signed Certificate of Authenticity Card states the series number.