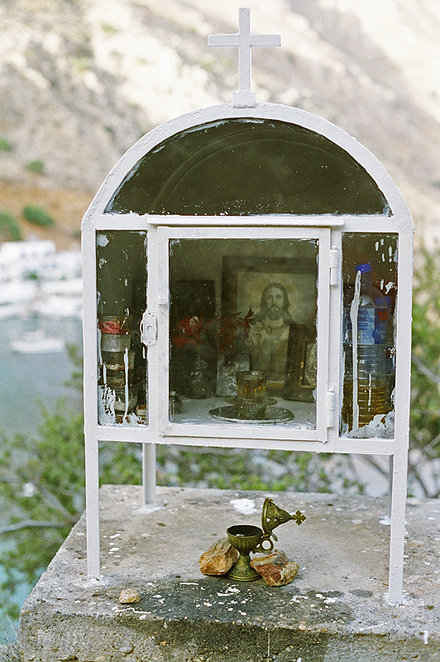 From: £22.00
Photographic Print. A metal shrine on the hill above Loutro, on the Greek Island of Crete.
Loutro is a small waterfront fishing village of white houses, hotels and tavernas nestling around a curved bay on the South West Coast of Crete. One of Loutro's main attractions is that there are no roads or traffic as the White Mountains, Lefka Ori, rise up directly behind the village, cutting it off, making it a quiet place. It can only be reached by walking or by boat. There are regular ferry boats from surrounding south coast ports or from locals. At the far end of the village, there is a paved path to the left up a slope which becomes a dirt track and the coastal path. I took the photograph of the shrine on this hill where there are some rings of stones, goats, Roman and Medieval ruins and a castle, Kules of Loutro which is a Turkish fortress built around 1868. There has been a settlement here since Roman times. Only a few hundred people live here, and the place is almost deserted in winter months.
Colours are as accurate as possible but may differ slightly due to screen calibrations.
Shipping outside UK mainland is estimated, on occasion a variation will be emailed before dispatch.
Images printed at a Fuji approved professional laboratory on highest quality archive papers, Fuji Crystal or DP 2.
A Signed Certificate of Authenticity Card states the series number.