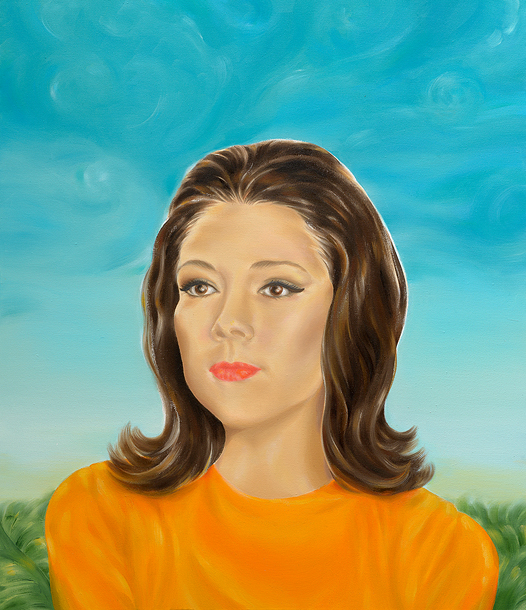 Emma Peel Far Away. I wanted to paint a portrait of Dame Diana Rigg as Emma Peel with her far away look, in perhaps, a far away place. To a child of 6, not understanding everything, more so than for an adult, The Avengers was enhanced as a wonderful surreal world. Patrick Macnee played the eccentric, suave, immaculately dressed John Steed and Diana Rigg played his partner in The Avengers from 1965 - 1967. She was a style icon of the period wearing tight zipped catsuits, defeating villains with Karate, fencing, her intelligence with a steely cool calm and driving a Lotus Elan. Story lines usually involved fighting a meglomaniac serial killer, killing top ministers, agents or business men in the most bizarre methods imaginable. It had elements of science fiction; the writers were futuristic in using ideas from up to the minute explorations and breakthroughs in science. Sets were often imaginative, bizarre, fantasy dream sequences, sometimes influenced by Surrealism and German Expressionism in film with the use of dramatic distorted angles. The name Emma Peel was taken from the British film industry expression M-Appeal, man appeal.

Colours are as accurate as possible but may differ slightly due to various screen calibrations.
Shipping outside UK is estimated as some countries vary so please enquire.