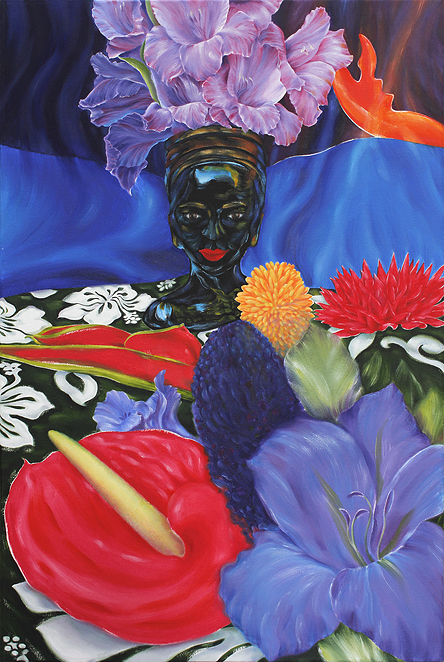 This painting was inspired by a series of photographs I took of exotic flowers and fabric, altars in Hawaii, Greek Islands and the Caribbean, a dream I had while staying in San Francisco, about a regally dressed exotic man with a staff, speaking to me. He had a very strong presence which stayed with me for weeks. The next day, I told the owner, Opal Essence, she smiled and said, a lot of guests have had vivid dreams while sleeping in that room. For the painting I used a 1960's black head vase whose face has a regal look. The idea of exotic princesses in lush backgrounds. Lilac Gladioli flowers are above her head like a crown and flowers laid before her like an altar.

Colours are as accurate as possible but may differ slightly due to various screen calibrations.
Shipping outside UK is estimated as some countries vary so please enquire.