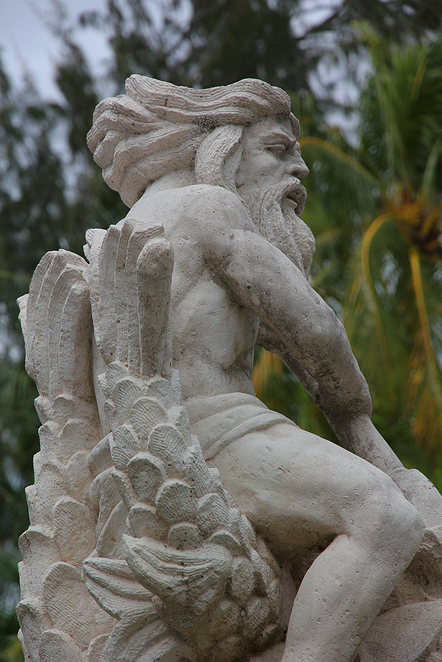 From: £22.00
Photographic Print. Neptune God stone statue in Lily pond and Palm trees in Holetown, Barbados, the Caribbean.
I like the way Neptune fiercely oversees his pool of water and looks out to sea just beyond the lily pond in this bar restaurant in Holetown. Neptune was the name that ancient Romans gave to the Greek mythological god of the sea and earthquakes, Poseidon. He was the brother of Jupiter (Zeus) and of Pluto (Hades). After the defeat of their father Saturn, the three brothers divided the world in three parts, the realms of Heaven, the earthly world, and the underworld. Jupiter took the sky, Neptune the sea and Pluto the underworld. Neptune was depicted as a bearded man holding a trident and seated in a seashell drawn by sea-horses. One day Neptune saw the water nymph Amphitrite dancing on the island of Naxos and fell in love with her. He asked her to marry him but she refused. He was not discouraged and sent one of his servants, a dolphin to look for her. The dolphin found her, and pleaded Neptune's cause so persuasively that she changed her mind. As a reward for finding and returning Amphitrite to him, Neptune immortalised the dolphin by placing it in the heavens as the constellation Dolphinus.
Colours are as accurate as possible but may differ slightly due to screen calibrations.Shipping outside UK mainland is estimated, on occasion a variation will be emailed before dispatch.Images printed at a Fuji approved professional laboratory on highest quality archive papers, Fuji Crystal or DP 2.
A Signed Certificate of Authenticity Card states the series number.