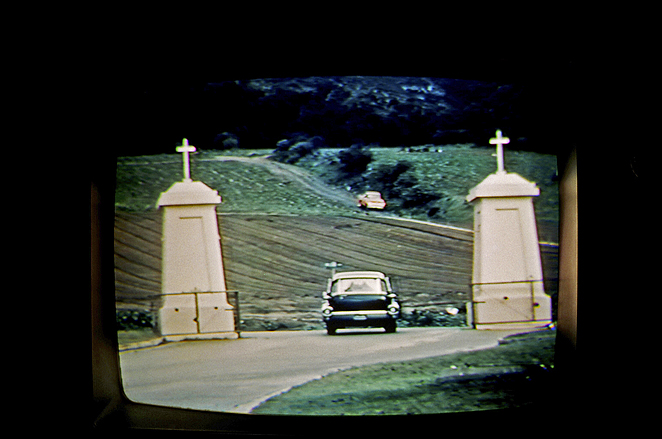 From: £22.00
Photographic Print. A still of a hearse and cemetery gates from the cult film Harold and Maude.
I took this photograph when it was shown on a retro tv. Harold and Maude meet while attending a funeral as they both like to frequent funerals of people they don't know. Harold drives around in a hearse and performs shocking dramas for the benefit of his mother who is self absorbed and controlling. The film plays with the theme of the circle of life and has wonderful symbolism of life and death. While Harold's black comic mock dramas are macarbre, ironically, in contrast, the message is life affirming. Maude teaches him how to play, love and enjoy life, take risks, 'A lot of people enjoy being dead. But they are not dead, really. They're just backing away from life. Reach out. Take a chance. Get hurt even. But play as well as you can. Go team, go!... LIVE! Otherwise, you got nothing to talk about in the locker room !'. The film was released in 1971, starring Bud Cort and Ruth Gordon and directed by Hal Ashby.
Colours are as accurate as possible but may differ slightly due to screen calibrations.
Shipping outside UK mainland is estimated, on occasion a variation will be emailed before dispatch.
Images printed at a Fuji approved professional laboratory on highest quality archive papers, Fuji Crystal or DP 2.
A Signed Certificate of Authenticity Card states the series number.