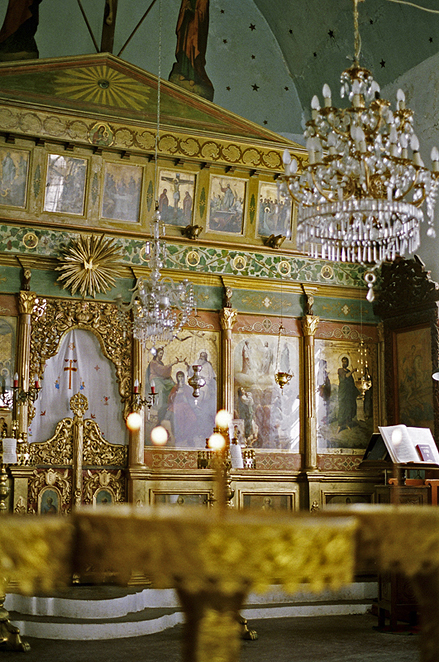 From: £22.00
Photographic Print. Glass chandelier in gold and turqoise interior in a chapel on the Greek Island of Crete.
Elaborately decorated with icon paintings, antique gold carvings, illuminated by candles and glass chandeliers, these walls and barelled ceiling are painted with pale turquoise and gold stars which have become beautifully textured with peeling paint. Crete was influenced by Catholic churches and by the Byzantine period. The Island came under the rule of the Byzantine Empire twice: the first from the late Roman period in the 3rd century to the conquest of the island by Andalusion exiles in the late 820s, the second from the reconquest in 961 to its capture by the forces of Genoa and Venice in 1205. An altar is any structure upon which offerings such as gifts and sacrifes are made for religious purposes and are found at shrines, in temples, churches and other places of worship such as the roadside or in homes. I think an altar can be non religious; a concentration of energy in one place, perhaps to wish for things. I cannot find any other images of it to find out which chapel it was.
Colours are as accurate as possible but may differ slightly due to screen calibrations.
Shipping outside UK mainland is estimated, on occasion a variation will be emailed before dispatch.
Images printed at a Fuji approved professional laboratory on highest quality archive papers, Fuji Crystal or DP 2.
A Signed Certificate of Authenticity Card states the series number.