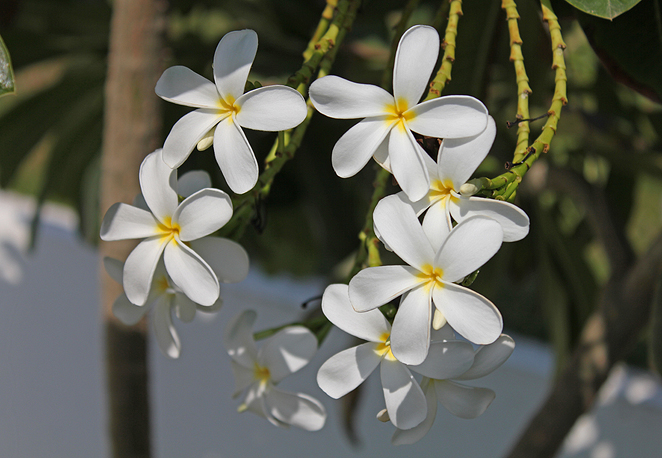 From: £22.00
Photographic Print. white Frangipani blossom flower, in a ring which symbolises eternity.
Frangipani is a tropical flower with waxy petals which emits a heady scent. It is thought that Plumerias are native to South & Central America but some say they are native to the Caribbean and were taken to the Americas by Spanish missionary priests, spreading them around the world as they travelled. The name, Frangipani, comes from the Italian nobleman, Marquis Frangipani, who created a perfume used to scent gloves in the 16th century. When the Frangipani flower was discovered its blossom scent reminded people of the scented gloves, so the flower was called Frangipani. The Latin name "Plumeria" is attributed to Charles Plumier, a 17th Century French botanist who described several tropical species, though the first to describe it was Francisco de Mendoza, a Spanish priest in 1522. According to the priciples of Ayurveda, the oil from the flowers is said to have a calming influence on those with fear, anxiety, insomnia or tremors and the Aztecs used a concoction of the flowers, other plants and certain internal organs of predatory animals as a powerful potion against fear. In Vietnamese myth, ghosts live in Frangipani and other trees with white and fragrant flowers. Vietnamese use them for their healing qualities to treat indigestion, high blood pressure, the bark prevents skin inflammation and the milk-like sap serves as a balm for skin diseases and in traditional medicine to cure high blood pressure, haemophilia, cough, dysentery and fever. In Hawaii the blossoms are used in flower necklaces called Ieis. In modern Polynesian culture, a frangipani worn by a woman over the right ear indicates seeking a relationship, and over the left if taken.
Colours are as accurate as possible but may differ slightly due to screen calibrations.
Shipping outside UK mainland is estimated, on occasion a variation will be emailed before dispatch.
Images printed at a Fuji approved professional laboratory on highest quality archive papers, Fuji Crystal or DP 2.
A Signed Certificate of Authenticity Card states the series number.