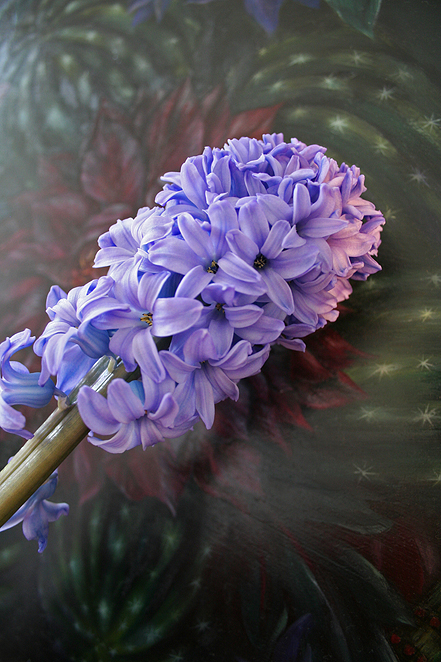 From: £22.00
Photographic Print. Blooming lilac Hyacinth with backdrop of Midnight Garden painting.
The way the light falls onto the blue Hyacinth changes some petals to lilac and softens the Cacti needles into hazy stars. In Greek mythology, Hyacinth was a beautiful youth loved by Apollo and the West Wind Zephyr which caused a feud between them. Apollo and Hyacinth took turns at throwing the discus and Hyacinth ran to catch it to impress Apollo but he was struck by the discus and died. Zephyrus had been jealous that Hyacinth preferred the radiant archery god Apollo and blew Apollo's discus off course, to injure and kill Hyacinth. Apollo did not allow Hades to claim Hyacinth, instead he made a flower, the hyacinth, from Hyacinth's spilled blood.
A Limited Edition Print of my painting Midnight Garden can be viewed in Paintings in Oils.
Colours are as accurate as possible but may differ slightly due to screen calibrations.
Shipping outside UK mainland is estimated, on occasion a variation will be emailed before dispatch.
Images printed at a Fuji approved professional laboratory on highest quality archive papers, Fuji Crystal or DP 2.
A Signed Certificate of Authenticity Card states the series number.