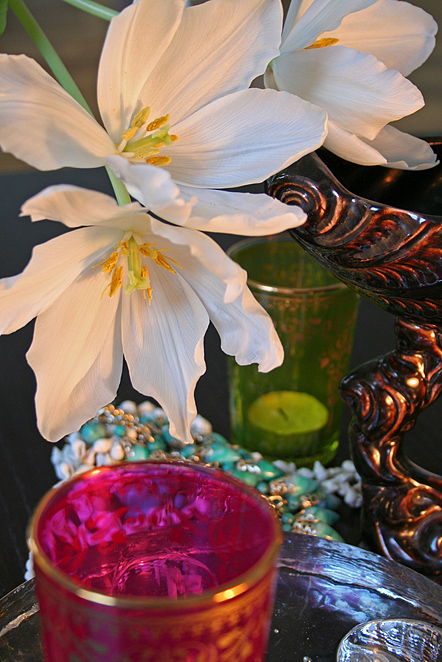 From: £22.00
Photographic Print. White Tulips glowing with light, vintage necklace and vase, Moroccan tea glasses.
White tulips are given to convey worthiness or a message of forgiveness. Although Tulips are associated with Holland, cultivation of the tulip began in Persia around the 10th century. The first mania occurred in 16th century in Turkey in the time of the Ottoman Empire and of Sultan Suleiman I, 1494-1566. Tulips became highly cultivated blooms, developed for the pleasure of the Sultan and his entourage. During the Turkish reign of Ahmed III (1703-30) it is believed that the Tulip was the supreme symbol of wealth and prestige and the period later became known as "Age of the Tulips". The Turks began the first Tulip Festivals, held at night during a full moon. Hundreds of vases were filled with the most exquisite Tulips, crystal lanterns casting an enchanting light over the gardens and aviaries filled with canaries and nightingales sang for the guests. 1594 is considered the date of the tulip's first flowering in the Netherlands. From the period of 1634 to 1637 bulb prices sky rocketed as "Tulip fever" spread like wild fire. Bulbs of one or two Guilders could be worth a hundred Guilders a few months later. This period of absurd speculation became known as Tulipomania and the phenomenon was so intense that, at the peak, a single bulb could be sold for a price which could have purchased a house in upmarket Amsterdam.
Colours are as accurate as possible but may differ slightly due to screen calibrations.
Shipping outside UK mainland is estimated, on occasion a variation will be emailed before dispatch.
Images printed at a Fuji approved professional laboratory on highest quality archive papers, Fuji Crystal or DP 2.
A Signed Certificate of Authenticity Card states the series number.