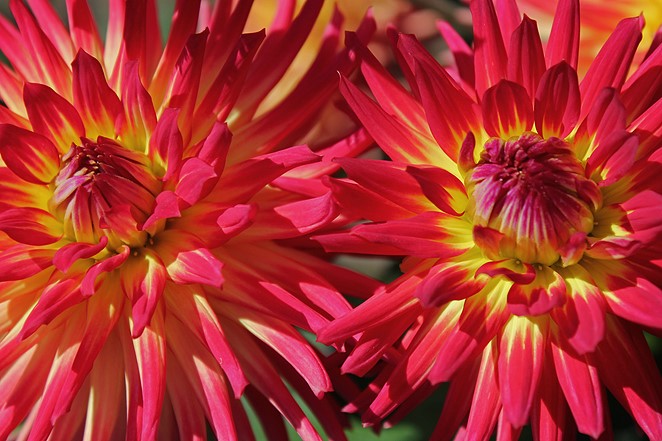 From: £22.00
Photographic Print. Semi-Cactus Dahlias in the Dahlia Garden in Golden Gate Park, San Francisco.
The elaborate Victorian greenhouse Conservatory of Flowers which opened in 1879 is made of glass and wood but has weathered storm damage, fire and the 1906 earthquake. Just to the right of it is the Dahlia Garden, magnificent when in bloom and where I photographed these flowers. The first reports of Spaniards finding Dahlias growing in Mexico was in 1525; the Aztecs used them as food, for decorative and medicinal purposes including epilepsy and the woody flower stems for water tubes and pipes. In 1963 the Dahlia was declared the national flower of Mexico. Dahlias were first grown in Europe at the Madrid botanical gardens in 1789 from seeds sent from the botanical gardens of Mexico.
Colours are as accurate as possible but may differ slightly due to screen calibrations.
Shipping outside UK mainland is estimated, on occasion a variation will be emailed before dispatch.
Images printed at a Fuji approved professional laboratory on highest quality archive papers, Fuji Crystal or DP 2.
A Signed Certificate of Authenticity Card states the series number.