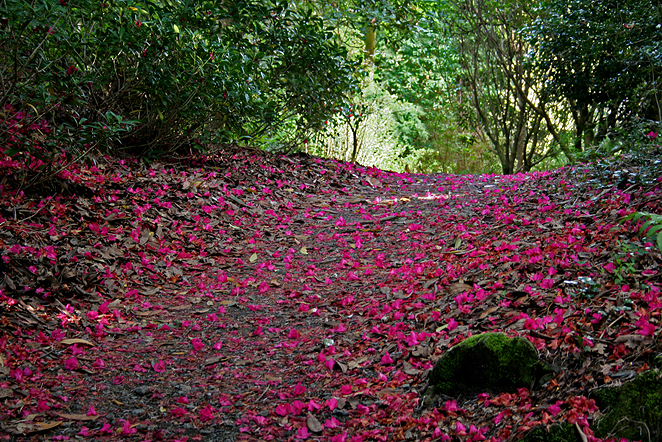 From: £22.00
Photographic Print. Pink pathway of Rhododendron blossoms in Portmeirion woodlands.
Beyond the village there are 70 acres of woodlands which is known for the rich diversity of it's rare and unusual plants. Rhododendrons first came to Britain in 1656, 359 years ago. Some landscapers rip out shrubs so that woods look sparse, bare but here pathways wind from landscaped areas into areas of dense lush woodland with trees allowed to arch beautifully over where you walk. From the 1850's onwards H.S. Westmacott and then Sir William Fothergill Cooke planted evergreen exotics such as Monkey Puzzles, Pines, Hollies, Cherry Laurels, Rhododendrons and Arboreum hybrids (Cornish Reds). These were planted mainly along an intricate meshwork of paths leading to the end of the peninsula. The Gwyllt wild gardens were largely developed by Caton Haig, one of the highest authorities on Himalayan flowering trees who collected all the originals during his travels in the Himalays around 1900. He was given a merit by the Royal Horticultural Society for his unique hybrid Rhododendron bred in Portmeirion, "Gwyllt King" c. 1938 with its characteristic intense red blossoms which flower in June. On his death in 1941, Sir Clough Williams-Ellis acquired the Gwyllt gardens and from 1953 onwards his daughter Susan Williams-Ellis worked with Clough on the development of the Gwyllt gardens. Tall Conifers, Maidenhair trees, Gingko biloba, the huge leaves of the Gunnera Manicata from the Brazilian rainforest, Camelias and large Rhododendrons, notably Rh. falconeri, fill the woods. In early spring Rh. macabeanum with its deep yellow flowers light up the scene and often coincide with the magnificent Magnolia campbellii with its huge light pink flowers. The willow-like Chilean Maytenus boaria is reputedly the largest in this country.
Colours are as accurate as possible but may differ slightly due to screen calibrations.
Shipping outside UK mainland is estimated, on occasion a variation will be emailed before dispatch.
Images printed at a Fuji approved professional laboratory on highest quality archive papers, Fuji Crystal or DP 2.
A Signed Certificate of Authenticity Card states the series number.