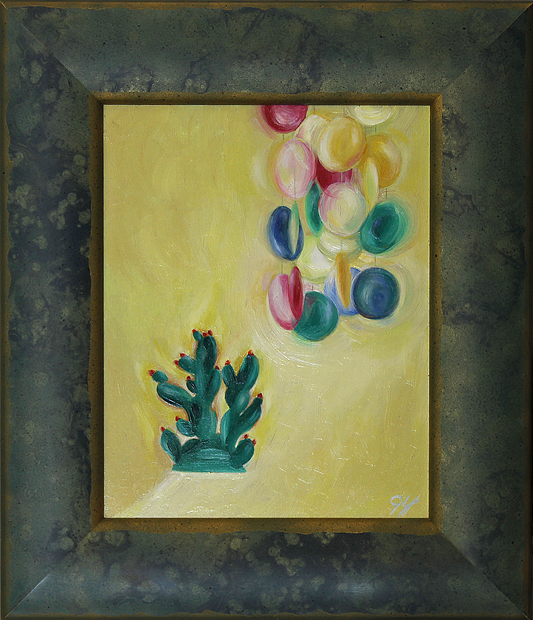 A Signed Certificate of Authenticity Card states the Original Painting.

Cactus and Capiz Shell Chimes. A still life painting of 1960's Capiz shell chimes in the light from a candle in a Mexican tin decoration Cactus candle holder. These decorations are hand painted with vibrant colours and the Capiz shell disc colours look beautiful with light through them. The Aztecs used tin as possibly a form of currency, it was later imported into Mexico from England in sheets and in 1824 Cornish tin miners left England for Mexico to mine the tin. There is one particular town, Pachuca in Mexico where the residents have blue eyes and some resemblance to their Cornish ancestors. It was with the advent of modern mining methods that a significant tin enterprise developed in the late 18th Century to early 19th Century. The decorations are inspired by the Milagros that adorn the church walls of Mexico. Milagros are the small silver and gold votive offering in the shape of body parts, animals, foods, houses, Cacti. Milagros would have traditionally been given to a saint in the hope of a prayer or to give thanks for a prayer answered. Hearts are a common symbol and represent a romantic hope.

Colours are as accurate as possible but may differ slightly due to various screen calibrations.
Shipping outside the UK is estimated as some countries vary so please enquire.