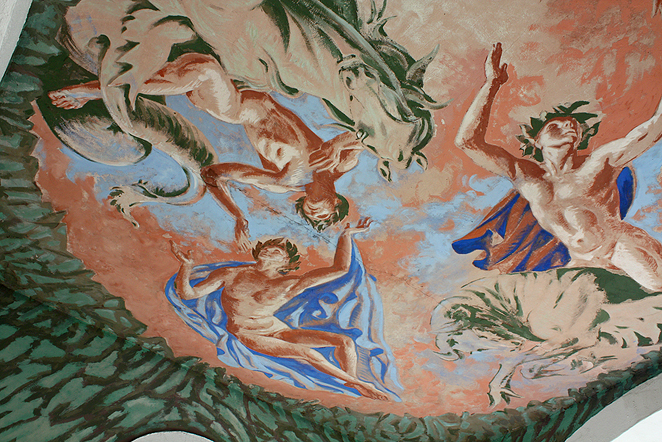 From: £22.00
Photographic Print. Fresco by Fiebusch of Mythological deity figures and Hippocampus on the Gate House. Portmeirion.
This is the grand entrance into the village. As you pass under the Gate House, looking up, this ceiling mural by Hans Nathan Feibusch, depicts a mythological Hippocampus and deity figures. The ancient Greeks believed that the hippocampus was a fish tailed horse, the adult form of the sea horse. In Greek mythology, legend says that Hippocampus pulled the chariot of Poseidon and nymphs and other sea creatures were often seen riding them. I love the way the green rock is painted and how it blends into the natural rock on which the Gate House is built into organically. The painting style of it reminds me of a Pizzaland restaurant I went to in Southport when I was growing up. I think it was themed as a ski resort and there was a hand painted mural on one wall of a snowy mountain scene in this style. It must have opened in the late 70's but the painting looked more like a 1950s or 1960s style.
Fiebusch was a German-Jewish artist who settled in England in 1933 and joined the London Group of artists in 1934.
Colours are as accurate as possible but may differ slightly due to screen calibrations.
Shipping outside UK mainland is estimated, on occasion a variation will be emailed before dispatch.
Images printed at a Fuji approved professional laboratory on highest quality archive papers, Fuji Crystal or DP 2.
A Signed Certificate of Authenticity Card states the series number.