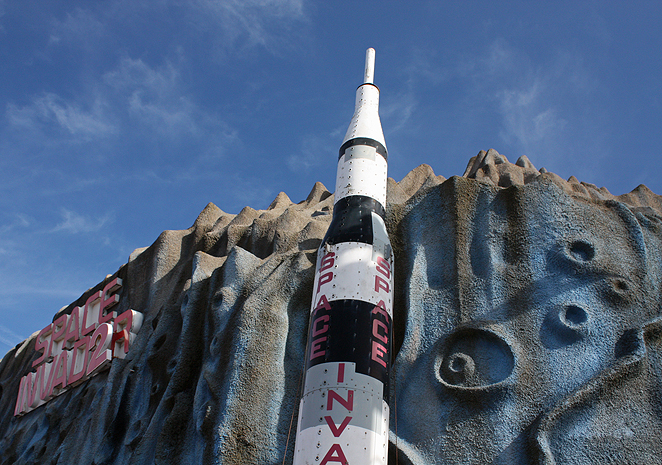 From: £22.00
Photographic Print. Space Invaders dark fairground ride crashed rocket in space mountain. Blackpool Pleasure Beach.
There was a time when every arcade and pub had a Space Invaders game, saving the Earth from intergalactic invaders. So Blackpool Pleasure Beach opened the Space Invader ride in 1984, an enclosed 4 man bob sleigh type roller coaster in the dark themed around space travel. There was a huge tv ad campaign titled as 'the world's most thrilling ride'. Then in 2004 the amusement park announced that the ride would be refurbished and renamed Space Invader 2. The space mountain became more blue, a number 2 was added to the sign and a wreckage of a spacecraft stuck out of the upper part of the mountain, a failed attempt crash landed on the lunar surface of Blackpool. The ride closed in 2008 and was sold to Brean Leisure Park, where it has been known as Astro Storm since 2010. I wonder if they have replaced it with a ride as equally impressive, visually pleasing and with as much attention to detail as the lunar mountain had. They could have kept the mountain and changed the ride inside. Fairgrounds have to evolve but I'm not sure Blackpool treasure the worth of old rides. Removed rides such as the Haunted House, Log Flume and Noah's Ark are surely iconic features of fairgrounds and the value and heritage of a fairground, particularly Blackpool Pleasure Beach comes from keeping these old rides. I believe none of the rides are actually listed buildings so they can remove anything that isn't making profit.
Colours are as accurate as possible but may differ slightly due to screen calibrations.
Shipping outside UK mainland is estimated, on occasion a variation will be emailed before dispatch.
Images printed at a Fuji approved professional laboratory on highest quality archive papers, Fuji Crystal or DP 2.
A Signed Certificate of Authenticity Card states the series number.