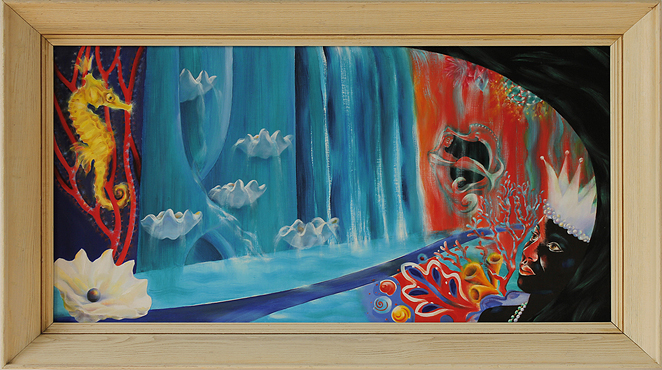 A Signed Certificate of Authenticity Card states the Original Painting.
King of Enchantment Cave. This painting was inspired by the magnificent Pacific Ocean Park, nicknamed POP, in Santa Monica, an amusement park open from 1958 to 1967. Among the fantastical rides and exhibits were: Enchanted Forest/USS Nautilus featuring a 150 foot long model of the atomic reactor section of a submarine. King Neptunes Courtyard was a colourful walk under the ocean to view King Neptunes' lair. Mystery Island Banana Train Ride was a Tikki styled entrance to a trip aboard a tropical banana plantation train complete with a simulated volcano and earthquakes. Ocean Skyway had bubble-shaped gondolas suspended 75 feet above the ocean taking passengers on a half mile trip out to sea and back. In Diving bell when the bell was allowed to surface, the hydraulic pressure holding the bell down was released causing the bell to shoot back up to the surface in a dramatic thrill.
Photographs of the giant Clam shell waterfall and pathways through fountain pools are wonderous, I wanted to combine them with other magical elements of the seahorse in coral, a jewelled cave, corals, shells, a mermaid and seahorse sculpture from a 1960's building and I modelled the king on Pharrell Williams.
It is also very much inspired by a River Caves ride I used to go on as a child at Southport Pleasureland, the painted scenes, coloured lights and sensation of floating through them on a small boat were so magical.
The water is actually mainly turquoise rather than blue, for some reason I cannot take a photograph of it as the turquoise, maybe because it is next to block of coral pink orange. Altering it on Photoshop doesn't work because of the layers of colour.
Colours are as accurate as possible but may differ slightly due to various screen calibrations.
Shipping outside the UK is estimated as some countries vary so please enquire.
Original Painting £750