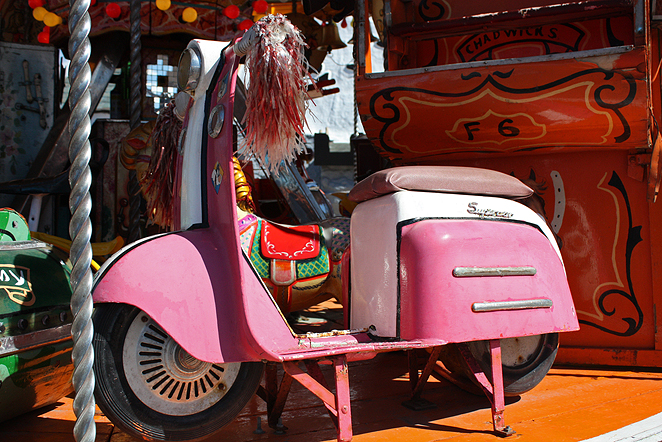 From: £22.00
Photographic Print. Pink scooter on Chadwick's children's carousel at Southport Pleasureland fairground, England.
This old fairground carousel ride had a tank, a fire engine, a stagecoach, a ship, a car, a traction engine, a moon rocket and an Apollo space rocket !, all imaginatively created and beautifully hand painted. This is something completely lost in modern fairground rides. I photographed this scooter on Chadwick's carousel at Southport Pleasureland in 2008. I don't know if it had always been there or came later, it was run by an elderly man, maybe Mr Chadwick. I can't find any information or images about it online other than mine. Some old fairground rides from Southport have been taken to a vintage fairground in Margate called Dreamland. The amusement park originally operated from 1912 to 2006 under the ownership of Blackpool Pleasure Beach, then in 2007 re-opened under new ownership but most of it has been demolished and rebuilt so I think it will be gone.
Colours are as accurate as possible but may differ slightly due to screen calibrations.
Shipping outside UK mainland is estimated, on occasion a variation will be emailed before dispatch.
Images printed at a Fuji approved professional laboratory on highest quality archive papers, Fuji Crystal or DP 2.
A Signed Certificate of Authenticity Card states the series number.