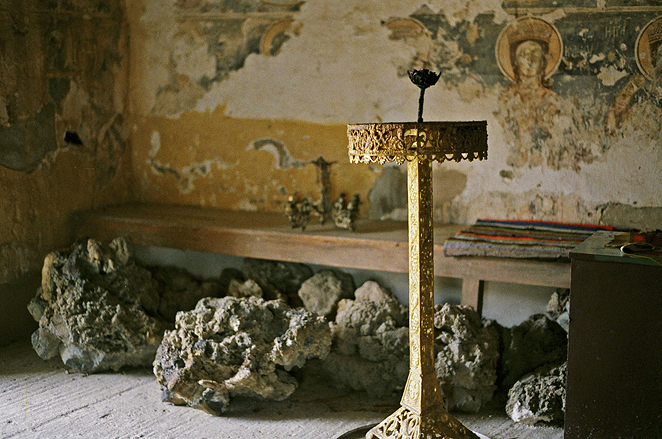 From: £22.00
Photographic Print. A gold altar and crumbling frescos in a Greek chapel in Parga.
Knowing nothing of it's history, this simple chapel with crumbling walls was so peaceful and mesmerising that I sat alone for a long time until a large group of teenagers entered through the door, immediately all ceasing their loud chatter into utter silence as if they had sensed they were walking into something sacred. The Necromanteion was an ancient Greek temple and sanctuary of necromancy devoted to Hades and Persephone. According to tradition, it was located on the banks of the Acheron river in Epirus, near the ancient city of Ephyra. This site was believed by devotees to be the door to Hades, the realm of the dead. The site was at the meeting point of 3 rivers, believed to flow through the kingdom of Hades. The word Necromanteion means Oracle of Death, an opening to the underworld and where the faithful came to talk with the souls of the departed. This site near the town of Parga on the northwest coast of Greece is one of several places which claims to be the spot where Hades abducted Persephone as she was picking flowers. The Greek Orthodox Church recognized its importance and built a chapel over the ruins of the oracle. Parga is a pretty town on the Ionian coast known for its scenic beauty and Venetian influence.
Colours are as accurate as possible but may differ slightly due to screen calibrations.
Shipping outside UK mainland is estimated, on occasion a variation will be emailed before dispatch.
Images printed at a Fuji approved professional laboratory on highest quality archive papers, Fuji Crystal or DP 2.
A Signed Certificate of Authenticity Card states the series number.