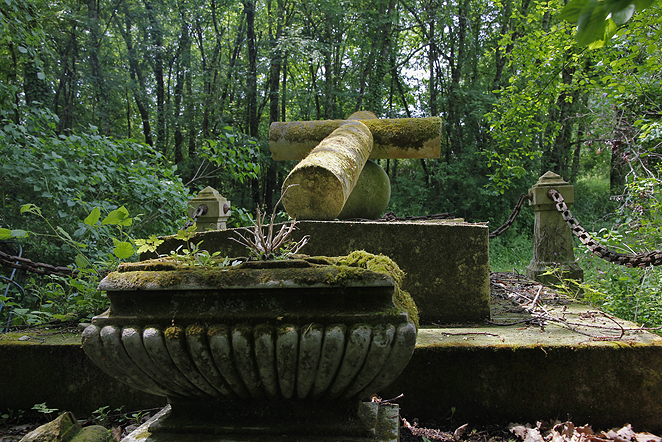 From: £22.00
Photographic Print. A stone cross rests on a tomb deep in the woods, a French garden tomb in Riocaud.
An enchanting tomb in the woods, like a magical lost tomb. I like the stone sculpture of the cross on the ball and the green doorway on the right of the photograph created by the trees. There are no inscriptions on the tomb. Ray and Debi intend to investigate the history of why it is there in their garden. The contrast of the surrounding green trees against the dead Chrysanthemum was interesting. The French traditionally buy chrysanthemums to take to the cemetery to decorate their family tombs and graves, particularly on November 1st when the Catholic Church celebrates Toussaint or All Saints' Day which as a bank holiday in France. This particular flower or plant is not given as a gift because of its association with death.
Colours are as accurate as possible but may differ slightly due to screen calibrations.
Shipping outside UK mainland is estimated, on occasion a variation will be emailed before dispatch.
Images printed at a Fuji approved professional laboratory on highest quality archive papers, Fuji Crystal or DP 2.
A Signed Certificate of Authenticity Card states the series number.